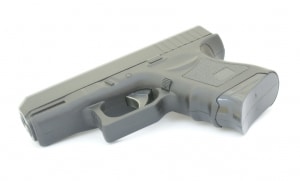 A common, unfortunate scenario that often occurs in the District of Columbia because of its strict gun laws, goes something like this:

Average out-of-state, law abiding citizen with no prior criminal record travels through or to the nation’s capital. We will call him John. John commits one of the hundreds of possible District of Columbia traffic infractions while driving. And this traffic infraction could involve something as innocuous as hanging something from the rear view mirror or having window tint that is too dark. One of the dozens of law enforcement agencies that has jurisdiction in the District pulls the person over. We will call him Officer Friendly. Officer Friendly either asks Johns: “Do you have any weapons in the vehicle” or John, accustomed to the laws of his home state, voluntarily announces to Officer Friendly that he has a firearm in the vehicle. John then tries to show Officer Friendly his home state concealed carry permit for his lawfully registered firearm. In John’s mind, all of this is no big deal.

What John does not know is that his life is about to change forever. Officer Friendly places John under arrest for “carrying a pistol,” which in the District of Columbia is a felony punishable by up to five years in prison. It is likely when John sees a judge for presentment after arrest, he gets held in jail for at least three days because of the felony charge. The Court may order pretrial release conditions like drug testing or reporting to the Pretrial Services Agency. And now John has a serious criminal matter hanging over his head.

Within a few weeks the United States Attorney’s Office for the District of Columbia will indict John through its Rapid Indictment Process (or “RIP”). The indictment will come down with at least three charges: carrying a pistol, which is a felony, and unlawful possession of a firearm and unlawful possession of ammunition (if the gun has bullets), which are both misdemeanors. John’s total criminal exposure will be seven years in jail.

To John, the whole situation is absurd, and he wonders if the government will just drop the whole thing.

The sad thing is the government will not just drop it. Even worse, in that scenario, there is virtually no basis to challenge Officer Friendly’s actions. No illegal search; no custodial interrogation; no violation of constitutional rights. John simply thought he was doing nothing wrong so he unknowingly admitted guilt to the officer. The best John can hope for is to find an experienced DC gun lawyer who can convince the prosecutor or her supervisor to offer him a misdemeanor plea. In some extremely rare circumstances, the government may offer a type of diversion where if successfully jumps through some hoops, the case will be dismissed.

Fortunately, many of the judges in DC Superior Court have more common sense then the prosecutors and their supervisors. If John’s DC gun lawyer can get him a misdemeanor plea agreement, the judge will likely impose a very easy sentence. The sentence could be as little as a small fine or a short period of unsupervised probation. However, John’s criminal record won’t be eligible for expungement for eight years and his life is forever changed.

To avoid John’s fate, if you plan to travel across state lines with a lawful firearm, make sure you check the laws of each state you plan to enter. Gun laws vary from state to state and, in a place like DC or other states with restrictive gun laws, ignorance of the law is not a defense. However, if you are reading this because you made the same mistake as John, I cannot overstate the importance of hiring a qualified DC gun lawyer with experience handling gun cases in the District. Please contact Scrofano Law PC today for a consultation.